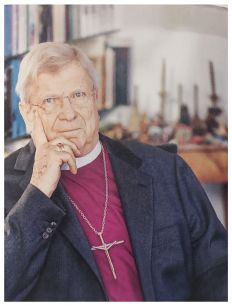 Hans Berny was born on June 26th, 1937 in Olten, where he grew up. He pursued his theological education at the Christian Catholic Theological Faculty at the University of Bern, where he completed the state examination. He supplemented his theological education as a visiting student at various faculties in Oxford and Paris. After he was ordained to the priesthood, he worked with several parishes of the Diocese and took up various offices in service of the wider church.

He was elected by the National Synod in Biel on June 5th, 1986 to be the fifth bishop of the Christian Catholic Church and was duly consecrated in Olten by Archbishop Antonius Glazemaker from the Netherlands.  He resigned his office as bishop on November 1st, 2001. He went on to live in Bern together with his wife, Marianne Gerny-Schild, who passed away on August 7th, 2020.

A defining event in his episcopacy was the introduction of women’s ordination in the Christian Catholic Church. He made it his mission that this question should be discussed among the churches within the Union of Utrecht and that a decision be reached without ecclesiastical schism. He also committed himself to a process of ecclesiastical renewal in his diocese.

In 1996 and 97, he presided over the primary Swiss ecumenical organization (Arbeitsgemeinschaft Christlicher Kirchen in der Schweiz). In addition to that, he was a member of a working group engaged in theological and economic matters (Arbeitskreises Kirche und Wirtschaft).

As the secretary of the International Old Catholic Bishops’ Conference, ecumenicism was of utmost importance to him.  From 1991 to 2006, he was a member of the Central Committee of the World Council of Churches as the representative for the Old Catholic Churches of the Union of Utrecht. At the same time, he actively engaged in dialogue with the Orthodox churches.

In 2001, he was awarded an honorary doctorate by the Christian Theological Academy in Warsaw for his valiant theological engagement.

Well beyond our church, Hans Gerny will remain in memory as person interested in people and things of beauty. He delighted in spirited celebrations, be it in worship services, community festivals, or by invitation. As a pastoral counselor, he accompanied many people as an attentive listener. We shall miss him and shall hold his memory in esteem.

The funeral will be held in the St. Peter and Paul Church in Bern, and the burial will take place at the Bremgarten Cemetery, by invitation, among close friends, family, and representatives from the Church. At a later time, the Diocese will invite friends of the Church, the Union of Utrecht, and ecumenical partners to participate in a memorial event.

Commissioner of Information of the