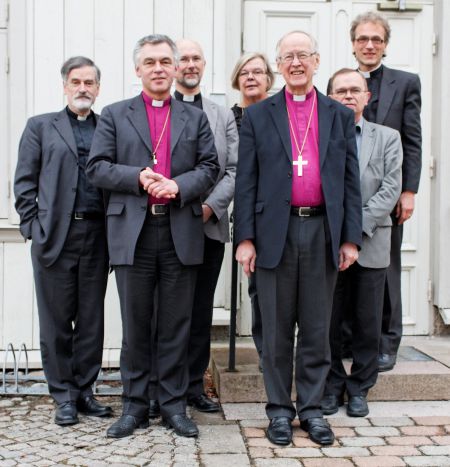 In 2005, the Old Catholic Churches of the Union of Utrecht began an official dialogue with the Church of Sweden to investigate the possibility of the two Churches entering into communion with each other. In the following years, the dialogue commission generally met twice a year: once in Sweden and once in a country where there is an Old Catholic Church.

The Old Catholic Co-Chair submitted an annual report of the commission’s work to the International Bishops’ Conference. In 2013 the commission published its concluding report titled Utrecht and Uppsala on the way to communion. [The report is available at: www.utrechter-union.org/fman/258.pdf (English) and www.utrechter-union.org/fman/256.pdf (German)].

The first meetings were primarily devoted to sharing information. The members of the commission presented the history and characteristics of their respective Churches and the problems that they currently face. They also visited churches in their host countries and worshipped together. Building on this foundation of growing mutual trust, work then began on a report that deals not only with the historical development, distinguishing features and challenges of the two Churches, but also the commonalities and differences between their theological and ecclesiological perspectives. Following an introduction (Chapters 1 and 2), the report contains a description of the two Churches (Chapters 3 and 4), a shared view of the Church as a gift of God’s presence in the world (Chapter 5), and recommendations and themes for ongoing consideration (Chapters 6 and 7). The commission recommended to the leading bodies of each Church that communion be agreed and confirmed.

At an extraordinary meeting in London on 10 October 2013, the International Bishops’ Conference resolved to conduct a consultation process within the Old Catholic Churches of the Union of Utrecht and among its ecumenical partners to be completed by 2016, taking the dialogue commission’s concluding report as its basis.

During its meeting in Prague from 15 to 19 June 2015, the International Bishops’ Conference discussed the report and the responses received. The Synods of the Old Catholic Churches in Germany and the Czech Republic had already responded favourably. In Switzerland, the report had been brought to the attention of the Pastoral Conference and the Synod. The Synod Standing Committee in Austria had approved the report, but in Poland no Synod had taken place at which it could have been discussed. The Old Catholic Church in the Netherlands presented the report at diocesan and provincial clergy meetings on 5 June 2014 and 12 May 2016. The House of Bishops of the Church of Sweden accepted the report at its meeting in November 2015.

The International Bishops’ Conference believes that the outcomes of the consultation process are a sufficient basis to officially confirm full communion as recommended by the dialogue commission in its concluding report. This will take place at the closing Eucharist of the General Synod of the Church of Sweden in Uppsala in late November 2016 and in Utrecht in spring 2017.

The members of the dialogue commission: