The Orthodox–Old Catholic Working Group set up by the Ecumenical Patriarchate of Constantinople and the International Old Catholic Bishops’ Conference gathered in Istanbul from 20 to 23 November 2011 for a regular meeting. The members were received in the Fener district, the seat of the Patriarch, by His Holiness Bartholomew, who spoke out in favour of continuing the dialogue and strengthening the long-standing relations between the two Churches. 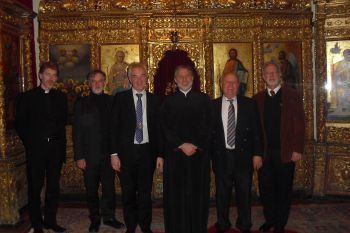 Prof. Kyrillos Katerelos (Athens), the Orthodox Bishop of Abydos, was in attendance as the working group’s new co-President for the first time. In this role he succeeds the recently deceased Dr. Michael Staikos, Metropolitan of Austria. Prof. Katerelos heads the working group together with Dr. Harald Rein (Bern), Bishop of the Old Catholic Church of Switzerland. On the day after their arrival, the members of the group attended the patriarchal/synodal liturgy to mark the feast of the Entry of the Most Holy Mother of God into the Temple. They were joined by Dr. Joris Vercammen, the Old Catholic Archbishop of Utrecht and Chair of the International Old Catholic Bishops’ Conference.

The main part of the working group’s meeting took place the following day at the Monastery of the Holy Trinity on the island of Halki, where the premises of the Orthodox Halki seminary (closed by the Turkish government in 1971) are located. The guests were welcomed by Prof. Elpidophoros Lambriniadis, who is the Metropolitan of Proussa and abbot of the monastery.

First the working group evaluated the two projects it launched in 2011: firstly, a joint seminar program of the Department of Old Catholic Theology at the University of Bern and the Postgraduate Institute of the Orthodox Centre of the Ecumenical Patriarchate for young Orthodox and Old Catholic students of theology in Chambésy, Switzerland, in April 2011; and secondly, an ecumenical study trip to the Orthodox Church of Crete and the Orthodox Academy of Crete in Kolymbari in September 2011 to enable Old Catholics to become more familiar with the Orthodox faith. 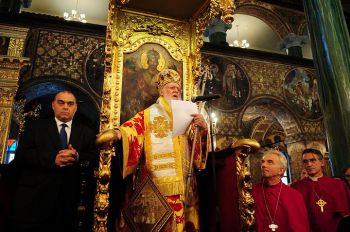 The six members of the working group then agreed on their next project. Based on an examination of three documents, they plan to draw up an Orthodox–Old Catholic document titled “A Christian Vision for a Humane Europe in Solidarity”. The three documents are the “Charta Oecumenica” of 2001, the “Contribution of the local Orthodox Churches to the realization of peace, justice, freedom, fraternity and love between nations, and the removal of racial and other discriminations” of the third Preconciliar Pan-Orthodox Conference of 1986, and the “Globalization and Catholicity” study conducted by representatives of the Old Catholic Church, the American Episcopal Church and the Philippine Independent Church in 2006–2008. The aim behind this initiative is to show that the Churches can play an important part in solving social problems by working together in the spirit of ecumenism. Prof. Konstantinos Delikostantis (Athens), Dr. Mattijs Ploeger (Utrecht), Prof. Grigorios Larentzakis (Chania and Graz) and Prof. Urs von Arx (Bern) from the working group will lay the groundwork for the project.