Dialogue with the Church of Sweden

The commission for the dialogue between the Church of Sweden and the Old Catholic Churches of the Union of Utrecht met in Bern, Switzerland, from 10 to 12 October 2011 to continue their talks. 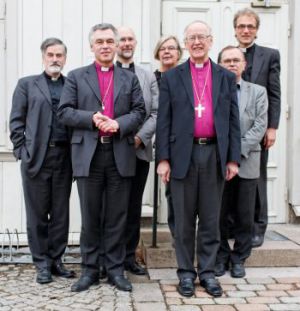 The members were given a warm welcome by the Old Catholic parish in Bern. On the Tuesday evening they were invited by Prof. Angela Berlis from the Department of Old Catholic Theology of the University of Bern to a presentation by guest speaker Prof. Sven Erik Brodd, titled “The Body of Christ has Aids. Ecclesiological Elements in Understanding ‘Church’  in the HIV and Aids Pandemic”. This talk was followed by a dinner organised by the Old Catholic Church of Switzerland, hosted by Bishop emeritus Hans Gerny. The group also attended morning and evening prayers at the Old Catholic church in Bern, and Eucharist on the Wednesday morning.

During their four working sessions, the commission’s members continued work on a joint document that was started at previous meetings and is soon to be completed. The document aims to serve as a basis for a possible form of community between the two Churches. Further meetings are planned in Sweden from 11 to 13 April and in Switzerland from 3 to 5 September 2012.