The spirit of Assisi

In 1986 Pope John Paul II invited leaders of Christian Churches and world religions to gather in Assisi to pray together for peace. His aim was to encourage an alliance of all believers to commit themselves fervently to achieving it. One of the critics of the initiative was the then-Cardinal Joseph Ratzinger, who thought that the meeting did not sufficiently express the differences between the religions. Believers of different faiths coming together to pray ­was a thorn in his side because of its potentially syncretic nature – even though each group prayed in a separate room. 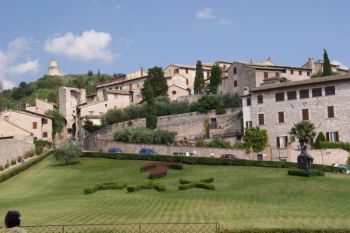 25 years on, in October 2011, Ratzinger – now Pope Benedict XVI – himself hosted an interfaith meeting with leading religious representatives in Assisi. This time he gave his own touch to the proceedings and the collaboration with other religions. Two distinct changes were made to the event in 1986. First, the “praying together separately” was replaced by shared moments of silence and time dedicated to personal reflection. Silence was also kept at a gathering in the square outside the Basilica of Saint Francis. Second, a number of non-believers were invited to attend. As the Pope stated in his address at the Basilica of Saint Mary of the Angels, this means not “unbelievers”, but rather “seekers” – agnostics to whom the “gift of faith has not been given” and who suffer from the “absence of God”. These people, he said, are also “pilgrims of truth, pilgrims of peace”. This relates not only to the identity that Christians share, but also to their relations with those who seek meaning in our secularised culture.

It is to the great credit of the Pontifical Council for Justice and Peace (Justitia et Pax) that the summit was a real high point in terms of both ecumenical cooperation and striving for interreligious dialogue. Cardinal Peter Kodwo Appiah Turkson, President of Justitia et Pax, gave a welcoming address to the delegations in which he talked about the Canticle of the Sun by Saint Francis. He pointed out that many people still feel a sense of isolation, despite the wealth of contact opportunities that social media have opened up. People are dominated by consumption, both of one another and of Creation. This is at complete odds with the canticle written by “il Poverello”, who sings of Creation as a community that we cannot treat well unless we have the necessary respect and humility.

In a moving address, the Ecumenical Patriarch Bartholomew stated that people often live with wounds that make them selfish, which is why there can be no peace without reconciliation.

Archbishop Rowan Williams stated that reconciliation is a process that must take place in the hearts of individuals and from person to person; with God and with Creation. Our greatest problem is fear. Fear of the unknown and the unfamiliar cripples our ability to create bonds, and results in isolation and the falling apart of society.

The Union of Utrecht was the smallest of the faith communities to be invited to the meeting in Assisi. We were glad to accept, not only because one does not ignore an invitation from the Pope, but also because we Old Catholics are keen to be a part of the interreligious commitment to peace in the world. It is important to us to support and to help build a community of believers. We were therefore delighted that a place was reserved in Assisi for a delegation from the Union of Utrecht, and I took part with great pleasure. If we emphasise the participative nature of the “people of God” in our view of the Church, we must also do so in our interaction with society. The Church is called to show that it is possible to achieve reconciliation, and thus peace, and to lead the way along this path.

We are in full agreement with the heartfelt words of Pope Benedict at the close of the meeting in Assisi: “No more violence. No more war. No more terrorism. In the name of God, may every religion bring upon Earth justice and peace, forgiveness and life, love.” And we repeat the words of blessing from Cardinal Kurt Koch, President of the Pontifical Council for Promoting Christian Unity: “May we be instruments of peace.”