Cardinal Kurt Koch, President of the Pontifical Council for Promoting Christian Unity, and Monsignor Matthias Türk received a delegation from the International Old Catholic Bishops’ Conference (IBC) of the Union of Utrecht for a discussion in Rome on 6 September 2011. The Old Catholic delegates were Archbishop Joris Vercammen, President of the IBC; Professor Urs von Arx from the University of Bern; and Revd. Ioan L. Jebelean from Lucerne, who is the IBC’s representative for ecumenical relations. 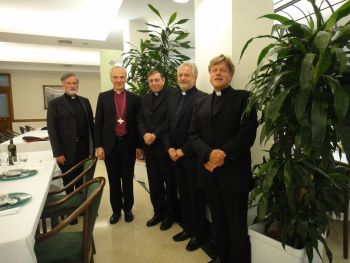 The representatives of the two Churches spoke about the responses to the “Kirche und Kirchengemeinschaft” (Church and Communion) report published by the International Roman Catholic–Old Catholic Dialogue Commission. The atmosphere of the discussion was very amiable and trustful, and the delegates agreed that “dialogue of truth and love” as expressed in the Commission’s work successfully paved the way for a new sense of mutual trust that should be strengthened further in the future.

Another topic on the agenda was the ecumenical discussions of each Church with other Churches. The Old Catholic Church is considering becoming an observer to the Old Catholic–Roman Catholic dialogues with the Orthodox and Anglican Churches, and this is currently being assessed with the dialogue partners.

It was agreed that the question of the relationship between the local and the universal church is the main problem facing the dialogue. This relationship should be considered in connection with the matter of papal primacy. According to the delegates, the Old Catholic consensus that church communion is a prerequisite for Eucharistic communion also deserves further consideration, especially in the light of talks between the Catholic Diocese of Old Catholics in Germany and the Evangelical Church in Germany that took place in 1985 and resulted in an agreement on the mutual invitation to celebrate the Eucharist. The full communion between the Old Catholic Church and the Anglican Church is another topic for future discussions, as are the questions of the ordination of women and the Marian dogmas.

In concluding, the delegations agreed to continue to the Commission’s work on the text of the “Church and Communion” report. A new, international Dialogue Commission should start work in early 2012. In addition, the report should soon be available in English and French.