Around 20 students met at the Orthodox Centre of the Ecumenical Patriarchate in Chambésy, Switzerland, from 7 to 8 April 2011 for a joint Old Catholic–Orthodox seminar titled “Historical, ecclesiological and liturgical-theological aspects of the Orthodox–Old Catholic dialogue texts”.

The bilateral Old Catholic–Orthodox dialogue that began in 1975 came to an end in 1987 following the formal agreement on a comprehensive dialogue paper. For various reasons, however, the results of this dialogue have been little-discussed within the two denominations since that time, and very little progress has been made. This situation formed the backdrop for the seminar, which was organised by representatives of various educational institutes (including the Old Catholic Seminary of the University of Utrecht and the Christian Catholic Department of the University of Bern). Among its aims was to make the students aware of the dialogue and to reactivate what was ended almost a quarter of a century ago. 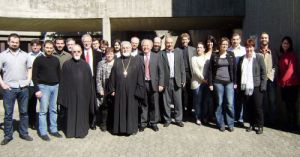 Seven Old Catholic students attended the seminar: three from the Netherlands and one each from Germany, Austria, Poland and Switzerland. The event attracted around 20 participants in total, representing 12 countries. Despite the international flavour of the seminar, the linguistic barriers were overcome with no problems.

On the agenda for the first day were introductory presentations about the two denominations. Professor Grigorios Larentzakis from the University of Graz provided an introduction to the Orthodox Churches, and Professor Mattijs Ploeger, Director of the Old Catholic Seminary in Utrecht, outlined the history and concerns of the Old Catholic Church.

The seminar’s success was thanks in no small part to the generous hospitality of the Orthodox Centre in Chambésy. The participants were also made to feel very welcome at the church services. Both days of the seminar began with an Orthodox orthros in the chapel, and an Old Catholic service of vespers was held on the Thursday evening. The attendees had plenty of opportunities to share their thoughts and experiences at mealtimes, during the breaks and in the evening.

Without doubt, the two-day seminar generated a great deal of interest in the dialogue between the two denominations, but more time would have been necessary to renew and re-intensify it. It could, however, mark a successful first step towards a new stage of dialogue — with more to follow. As a next step, a trip to Crete in September 2011 is being organised for Old Catholics who would like to find out more about the Orthodox Church.