Getting to know the Orthodox Church on Crete

In the autumn of 2010, the Orthodox–Old Catholic Working Group made plans for a study trip to Crete, which was arranged by Professor Grigorios Larentzakis (Graz and Chania). The Working Group aims to ensure that the dialogue that was successfully concluded by the Mixed Theological Commission in 1987 is applied to a wider church framework. 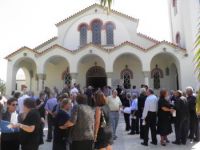 The study trip to the semi-autonomous Church of Crete, which belongs to the Ecumenical Patriarchate and is led by an Episcopal Synod (headed by an archbishop) was designed to enable interested Old Catholics to spend time with Orthodox Christians and to become more familiar with their church life.

Although the 11 Old Catholic participants from the Union of Utrecht made up a smaller group than the organisers had expected, they soon discovered how seriously their visit was taken; they were treated almost as an official delegation from the Old Catholic Church. This was particularly evident at the meetings with the bishops. The Holy Metropolis of Kissamos and Selinon, who is also the President of the Orthodox Academy of Crete (OAC), invited the group to attend a service on the Sunday, where he included the Old Catholic guests and their Orthodox counterparts (who were also treated as a delegation) in the prayer of commemoration — which, strictly speaking, is an expression of an existing union. 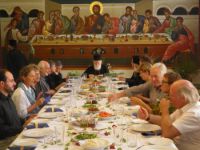 The Archbishop of Crete welcomed the group for lunch at the Synod Hall and spoke to each visitor in a way that brought Mark 10:43 to mind. Any initial reluctance on the part of the Old Catholics (who had originally planned to go swimming or hiking) soon disappeared in the face of such a warm welcome. And they still had plenty of time for the leisure activities later on.

The Orthodox Church had organised several (German-speaking) speakers who introduced the Old Catholic guests to various aspects of the Orthodox faith, the history of Crete and the wide-ranging activities of the OAC.

The OAC proved to be the perfect venue for talks and meetings, thanks not only to its location by the sea and its excellent infrastructure, but also to the spirit of openness, which reflects the commitment and dedication of the Ecumenical Patriarchate with regard to ecumenical relations, human dignity, and safeguarding creation. 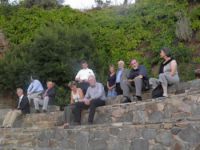 Professor Larentzakis in particular warmly assured the study group that the Ecumenical Patriarchate wants to continue and intensify its dialogue and relations with the Union of Utrecht at all costs, irrespective of the difficulties at varying levels on both sides that seem to make it impossible to achieve church communion in the near future as discussed in the official dialogue. It appears that the central problem is not the Old Catholic ordination of women to the priesthood (which many Orthodox theologians do not regard as a dogmatic impossibility), but the divergence of Eucharistic and ecclesiastical union, i.e. sharing the Eucharist despite not being in church communion due mainly to variances in beliefs, cultural considerations and constitutions. The Orthodox Church’s use of the term “intercommunion practice” to also describe the Old Catholic–Anglican communion is no longer applicable in view of the terminology used today. But with regard to the existing full communion between the Old Catholic Church and the Anglican Church, it can hardly be disputed that the “fundamentals” of faith are expressed differently in their scope and nature than is the case with the potential union between Orthodox and Old Catholic Christians.

In conclusion, the study trip to Crete met its objective and provided the participants with deeper insights into the world of the Orthodox Church.