Funeral of the Pope Emeritus 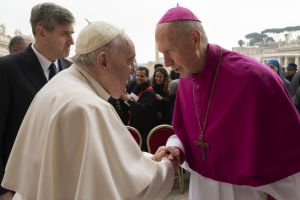 As a representative of the International Bishops' Conference of Old Catholic Churches of the Union of Utrecht, the Bishop of the Old Catholic Church of Austria, Dr Heinz Lederleitner, took part in the Requiem Mass for the late Pope Benedict XVI on 5 January 2023 in St Peter's Square, Rome. He was an official guest of the Dicastery for Promoting Christian Unity. Following the service, there was a brief meeting with Pope Francis, during which Lederleitner was able to introduce himself. Pope Francis asked for prayers for him - a moving moment. As Old Catholics, we feel connected to the Bishop of Rome, the decisions of the 1st Vatican Council on the primacy of jurisdiction and infallibility still separate us, but the last dialogue papers and the official invitation of the Old Catholic bishops to Rome in 2014 may be considered ecumenical milestones that point a good way to the future.

Several condolences were exchanged in the days leading up to the funeral. The Archbishop of Utrecht, Bernd Wallet, wrote on social media, "Sharing in the mourning of the worldwide Church for the passing away of Pope Emeritus Benedict XVI, I give thanks above all for the profound reflections he gave us on the mystery of God's love revealed in Jesus Christ. There is much in his books, sermons and encyclicals that inspires me personally, as they do many others in wider ecumenism, to grow in the faith whose basis is not "an ethical choice or a lofty idea, but the encounter with an event, a person." Where he writes about the spirit of the liturgy in this sense, he helps the church stay close to its source. At the same time, there are developments that have overshadowed his time in ministry, though he could eventually apologise. Ecumenically, I think that is all overshadowed by his free decision, as the first pope since 1415, to resign. In doing so, he took an important step in bringing back proper human proportions to the very nature of the service of the Bishop of Rome; a step, incidentally, whose ecumenical harvest is yet to be reaped. He will be prayed for in many of the parishes of the churches of the Union of Utrecht this New Year. Peace and eternal rest grant him the Lord God, and the light that lasts forever may shine upon him."