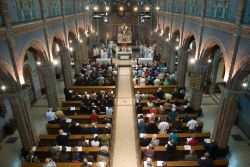 Welcome to the website of the Old Catholic Churches of the Union of Utrecht. This union is a family of nationally organised Catholic Churches that hold fast to the beliefs and practices of the early undivided Church, without rigidly adhering to the past. They aim to retain what is good while being open to the renewal of church ... lesen Sie mehr >>

The designated Archbishop of Utrecht, Bishop Bernd Wallet, will receive the episcopal consecration on Saturday November 7, 2020 at the Grote de Lebuïnuskerk in Deventer. The day after his consecration, he will be installed in the Sinte Gertrudis Cathedral in Utrecht.

The 49-year-old Bernd Wallet was elected new Archbishop of Utrecht on 15 February 2020 by the Utrecht Chapter in the first round as successor to Bishop Joris Vercammen. Immediately after his election he was given full administrative power of the episcopate. However, due to the COVID 19 pandemic, his official ordination and investiture were postponed. The consecration now takes place on 7 November, the feast day of St Willibrord, who thirteen centuries ago was the first proclaimer of the faith in the Netherlands and the first archbishop in Utrecht.

Normally the consecration ceremony would take place in Utrecht Cathedral. Due to the restrictions imposed by the COVID-19 virus, this will not be possible. A suitable place is the Lebuïnuskerk in Deventer (see below for more information about this church). In addition to priests*, faithful and other directly involved persons from the Archdiocese of Utrecht and the Diocese of Haarlem, numerous foreign bishops - who will also ordain the Archbishop - and other dignitaries are expected. The installation of the archbishop will take place in Utrecht. The day after the consecration, Bishop Wallet will officially take possession of the bishop's seat ("cathedra") there. The last time there was an episcopal ordination in the Old Catholic Church of the Netherlands was in 2008, when Bishop Dick Schoon took office as the new bishop of Haarlem.

Sunday, 8 November 2020, 03.00 p.m. - Installation of Bishop Bernd Wallet as Archbishop of Utrecht in the Cathedral Sinte Gertrudis, Willemsplantsoen 2 in Utrecht.

The seats in the churches are limited. Information about access regulations and about possible online participation will be given in time.

Lebuïnus was a monk with Saxon roots from the 7th to 8th century A.D. He grew up in England and was a contemporary of St Willibrord, the English monk missionary who came to the Netherlands in 690 to be the first to preach the Gospel. A few decades later Lebuïnus made the same crossing and was commissioned by the then Archbishop of Utrecht to work as a missionary in Gelderland and Overijssel. He founded his first church in De Wilp, a village near Deventer. Because of Lebuïnus' success in spreading the Christian faith among the Saxon population, he faced more and more resistance from the local chiefs. It almost cost him his life, but he managed to escape to Utrecht. After Charlemagne had defeated the Saxons, Lebuïnus was able to return to Deventer. He died there in 773 and the present Lebuïnus Church was built on the site where, according to tradition, Lebuïnus himself built a chapel. For a short time, it served as the cathedral of the diocese of Deventer (1559-1591), but was then taken into use by the reformers. Since 1758 the Old Catholic Church also knew bishops of Deventer. Bishop A. Glazemaker was the 13th and last Bishop of Deventer, a title he held until he was appointed Archbishop of Utrecht in 1982. Saint Lebuïnus is still venerated today as the patron saint of Deventer. The choice of this place as the site of Bishop Bernd Wallet's episcopal consecration marks the historical ties between the bishoprics of Deventer and Utrecht.

Even if a resurgence of the COVID-19 virus in the Netherlands makes large gatherings such as this unexpectedly impossible, the consecration and intronisation - in an adapted form - will take place on the weekend of 7 November 2020.