The conference set aside time for an Old Catholic/Anglican debate on the topic of "Church-Unity-Freedom", this was held in the local town hall. It was organised under the umbrella of the "Lublin Ecumenical 2019" project by the local ecumenical group whose members included Vicar General Andrzej Gontarek, pastor of the Polish Catholic Church in Lublin. Brief opening statements from Archbishop Joris Vercammen and Bishop Michael Burrows were followed by lively discussions of the topic. 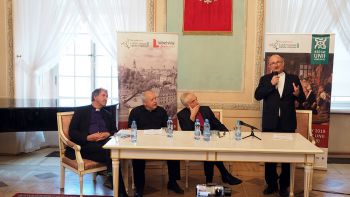 The 1569 Union of Lublin united the Kingdom of Poland and the Grand Duchy of Lithuania to form a single state, the Kingdom of Poland-Lithuania, with a common monarch, common parliament and common currency. The Union of Lublin is a unique example of the democratic merging of two states in which different ethnic and religious groups lived together peacefully as equals.

But to start with, there was a visit to meet Archbishop Stanislaw Budzik, the Roman Catholic Metropolitan of Lublin. The meeting took place in the bishop's residence and was followed by discussions of common ecumenical relations. Then the archbishop himself took the time to guide the bishops on a tour of the cathedral.

The Bishops' Conference received the final report of the dialogue between the two churches. This clarified and resolved various questions that had been raised. On receipt of the report, the IBC pronounced Communion with the Mar Thoma Church.

The IBC was able to welcome Prof. Slawomir Pawlowski from the Roman Catholic University of Lublin, who, as Professor of Ecumenism, reflected on the IRAD documents from a Roman Catholic perspective and then opened discussion with the Bishops. After additional internal deliberations, the Bishops adopted the following statement:

After the Second Vatican Council, the Roman Catholic Church and the Old Catholic Churches of the Utrecht Union entered into conversation. Then, in 2004, these talks led to the opening of official dialogue between the two Churches, the second phase of which has been completed with this present report.

This report builds on the content of the First Report 2009 (IRAD I) and is intended to provide further explanation of outstanding or insufficiently clarified issues. The issues in question are: the relationship between the local church and the universal church, in view of papal primacy; the question of dogma and infallibility; open questions about the Marian dogmas of 1854 and 1950; clarifications on the ordination of Women to priestly ministry; and clarifications on the inherent connection between Eucharistic communion and Church communion.

The IBC welcomes the in-depth communion-ecclesiology that characterizes the document and in which we see a decisive step towards resolving the so-called "family quarrel". We hope that this ecclesiological approach will enable the outstanding issues to move closer to consensus so that church communion becomes attainable. 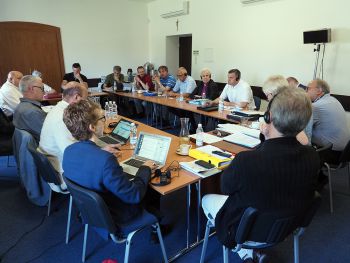 The 17th meeting of the Anglican Consultative Council took place at end of April. The gathering of representatives of 37 of the 40 church provinces was joined by Bishop Schoon for the Utrecht Union. The Final Report of the AOCICC for the period from 2013 to 2019 was brought before the meeting. This presentation of the work of the Commission was impressive and speaks for a good continuation of very positive cooperation within our church communion. With the presentation of the report to both the ACC and now the IBC, the work of the Commission has come to an end. It will be reconvened after the next Lambeth Conference in 2020 and continue its work. The IBC thanked all members of this Commission for their commitment to deepening our church communion. In future, the Old Catholic Churches will be represented by Bishop Rein.

Bishop Rein resigns as co-chair of this group. The task is now assumed by Bishop Ring. Other membership of the group remains unchanged.

The IBC again looked at its internal structures, namely at the organization of the communication and the bureau. Based on preparatory work undertaken with the support of a specialist, the first structural changes have already been considered. These will be taken up at future meetings of the bureau and should result in essential, cost-saving changes in communication and office structures by 1st July 2020.

A meeting with the Anglican Bishops responsible for mainland Europe was held from the evening of 24th June until lunchtime on 25th June. Discussions focused on issues of joint projects, the Willibrord Society, the AOCICC report and opportunities for closer cooperation in the areas served by the Old Catholic Churches on the European mainland. 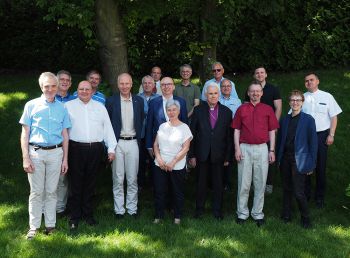 The Bishops took the opportunity to wish Bishop Wiktor Wysoczański a belated happy 80th birthday and to thank him for his years of episcopal service. He is the most senior Bishop in the IBC and for some years has been the only Old Catholic Bishop in Poland.

Special thanks were also offered to Bishop Michael Burrows of the Church of Ireland. For the past seven years, he has attended meetings as the delegate of the Archbishop of Canterbury and his presence has been an enrichment to both Churches.

The planned date for the next meeting of the International Old Catholic Congress was also announced: it will take place from 1st to 4th September 2022 in Germany, probably in Bonn.

The next ordinary meeting of the International Old Catholic Bishops' Conference will be from 21st to 25th June 2020 in Prague, Czech Republic.