The Anglican–Old Catholic International Co-ordinating Council (AOCICC) met in the Arbeitnehmerzentrum in Königswinter near Bonn, Germany, from 4 to 8 July 2017. The meeting was hosted by the Old Catholic Churches of the Union of Utrecht. This was the fifth meeting of the Council under its current mandate.

The work of this meeting included:

A significant feature of the 2017 meeting of the Council was the receiving of the results of the survey Belonging together in Europe commissioned by the Council in 2015. The Council was encouraged by the 106 responses from five countries across mainland Europe. The survey reflected a high level of awareness of the relationship of full communion between Anglicans and Old Catholics. The survey illustrates the varied ways in which the churches are engaging with each other, especially in areas where congregations from both churches are present in the same place. Respondents requested more resources for joint worship services. The survey reflects concern with the issues of overlapping jurisdictions. There is a wish for a more strategic approach to mutual engagement in service, witness and mission. The Council agreed to send out the results of the survey to all respondents and participating churches and invites their comments for consideration at next year’s meeting.

In the light of the many requests of survey respondents for more information about each other’s churches, it was 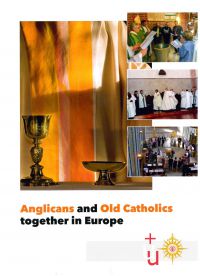 providential that the Council had planned the launch of the brochure Anglicans and Old Catholics together in Europe in the context of this year’s meeting. The launch took place at the Hotel Königshof in Bonn overlooking the Rhine. It was in this historic location that the text of the Bonn Agreement between the Anglicans and Old Catholics was signed on 2 July 1931. The brochure seeks to provide an introduction, in a fresh and attractive way, to the Anglican and Old Catholic Churches in Europe. It is a distillation of issues raised in the Council’s own 2011 statement Belonging together in Europe – A joint statement on aspects of ecclesiology and mission. The brochure is to be distributed by the various Anglican and Old Catholic dioceses to parishes and local communities.

Twenty-one young adults from nine countries joined the Co-Chairs of the Council and the national youth minsters of Austria, the Netherlands and Switzerland for an AOCICC international pilgrimage to the Shrine of St Willibrord in Echternach, Luxembourg, over Ascension, from 25 to 28 May 2017. The Council records its gratitude to the Revd Antje Kirchhofer for her tireless efforts in organising the pilgrimage. The Council received with appreciation a common statement from the participants in German and English called the Willibrord Declaration/ Willibrord Erklärung. It commends this text (see appendix) to the churches. The Willibrord Declaration will inform and shape the Council’s work and future mandate. Similarly, the Council recommends that the issues identified in the Declaration will be addressed by participants of the International Old Catholic Youth Congress in Austria, from 20to 23September 2018. The Council encourages participants of the pilgrimage 2017 to attend next year’s congress.

At the request of the recent meeting of Anglican and Old Catholic Bishops on mainland Europe, the Council reflected on the issues of child abuse and safeguarding. The Council recognises the centrality and importance of safeguarding in both communions whilst noting the differences in the structure and procedures of each national church policy. The interchangeability of ministers is a significant area where the churches are obliged to exchange information and to take the utmost care in ensuring consistency in their policies and procedures.

The work of the Council began and closed with a Eucharist at which the Bishop of Haarlem, Dr Dirk Jan Schoon, and Bishop David Hamid, Suffragan in the Diocese of Gibraltar in Europe, presided and preached respectively. The Council also prayed the Daily Office together according to the Anglican and Old Catholic traditions. The Council especially appreciated the opportunity to join the celebration of Ecumenical Vespers in the Namen-Jesu-Kirche in the centre of Bonn. The Council appreciated the help and assistance provided by Ordinariatsrat Dr Ralph Kirscht at the Episcopal Office and AOCICC member Jennifer Knudsen for their invaluable support in planning this meeting and facilitating contact with the local Anglican and Old Catholic parishes. The Revd Richard Gardiner and the Revd John Clasper from the Anglican Chaplaincy of Bonn and Cologne attended part of the meeting. Reiner Knudsen, vice-chair of the Synod Standing Committee of the Catholic Diocese of the Old Catholics in Germany, joined the Council at its closing Eucharist and brought the greetings of its Bishop, Matthias Ring.

The Council will next meet in Winchester, England, 22–26 May 2018, hosted by the Anglican Communion and then in Prague, Czechia, 16–19 January 2019, hosted by the Old Catholic Churches Union of Utrecht.

Members of the Council: