Relations with the Roman Catholic Church

Because of the interdenominational climate at the end of the 19th century and beginning of the 20th century a rapprochement of the Roman Catholic Church and the Old Catholic Church seemed impossible.  On the basis of its declared theological goals since 1870, the latter put its efforts into an envisioned church unity oriented on the faith and order of the early church and consequently dialogue was initiated very quickly with the Orthodox and the Anglican Church.

Changes after the Second Vatican Council

This situation changed with the proclamation of a Second Vatican Council by Pope John XXIII, who desired that the new council have ecumenical significance.  During the preparations for the council the Dutch theologian and later Cardinal 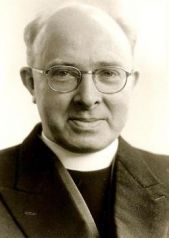 This led to the creation of various national bilateral dialogue commissions since 1966 and finally to an official dialogue at the international level (1972-1973).  The primary goal of the latter was to reach an agreement about mutual pastoral help.  This goal was not reached for different reasons.  The dialogue did, however, create insights into the things both churches have in common, which then became the basis for a new phase of the continuing dialogue.

The Commission came to the conclusion – the same conclusion the earlier dialogue had reached – that the Old Catholic Churches and the Roman Catholic Church have many things in common:  commitment to the holy scriptures and to the creed of Nicea-Constantinople, acceptance of the dogmatic decisions of the historic ecumenical councils of east and west, the office of bishop in apostolic succession, a succession in which the whole church stands, and the seven sacraments.  These are the common ecclesiological foundation stones upon which ecclesial unity is based.

The main reason for the separation of both churches centers around different understandings of the relationship between regional churches and the papal primacy (1723) and in the dogmas of the First Vatican Council about papal infallibility and papal jurisdictional power (1870).  The Old Catholics also questioned the special role of the pope in the church as a whole (primus inter pares).

In the meantime the deepened ecclesiological reflections - on both sides - concerning the ministry and role of the pope for the communion of regional churches have shown that there are no longer insurmountable opposing views.  Further details on this can be found in the final document issued by the Dialogue Commission, which is also a result of that collaborative reflection on these matters to which Pope John Paul II encouraged the recipients of his 1995 encyclical “Ut unum sint.”  This final common document may be considered the Old Catholic response to the papal challenge; it presupposes that the so-called papal question should not be considered in isolation, but only within the context of a comprehensive reflection on the church as a fellowship of regional and local churches in which the one, holy, catholic and apostolic church fully exists, namely the church we confess in the creed.

In the process of its deliberations the Dialogue Commission came to a formulation of its text within the horizon of possible ecclesial fellowship.  Of course, they could not deny that even on the basis of a mutually confessed faith there are in both churches varying and diverging developments of some doctrinal topics and ecclesiastical discipline.  Using the methodology of “differentiated consensus” these matters were dealt with and articulated.  In the judgment of the commission some aspects of this divergence create limitations for the realization of  a possible ecclesial fellowship.

The Commission finished its work after eleven sessions in May 2009 and published a mutually agreed upon text in book form titled Kirche und Gemeinschaft, Bericht der Internationalen Römisch-Katholisch-Altkatholischen Dialogkommission.  The report is now available to the various jurisdictions for consideration and evaluation.  Clearly some aspects of the report are in need of further clarifying conversation.  The Commission hopes, however, for a process of productive reception on all levels, without which the intended goal cannot be reached.