UU > English > Theology > The Nature of the Church and its Mission

The Nature of the Church and its Mission

The Church has its source and foundation in God who is its future, presence, and past. It is not possible to fully expound this in a systematic way starting from the biblical message, the basic echo of the Christ event, with all the underlying and ensuing interpretations of God, world and humans. A short sketch must suffice. The Church is the manifestation of the reconciliation initiated by God, as it is in the Church that humans being justified as sinners recognize and accept each other as brothers and sisters. The Church is the communion of humans called to holiness; it is on a pilgrimage to the perfection that will include the entire creation when God is all in all. The Church is participation in the life of God and thus communion of the baptized with God, with other baptized, indeed with all creation. The reconciliation is grounded on God’s mission of Jesus, Son and Logos of God, on his death and resurrection, and it is realized and recognized in the gifts of the Holy Spirit enabling humans to act as bearers of the love and knowledge of God and as his responsible partners. 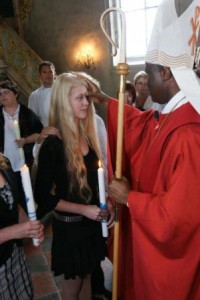 The Church, then, has its foundation in Jesus Christ and in the Holy Spirit, as the life giving mission of Christ is in the power of the Spirit and as the Spirit makes present this life in time and space, in a continuous process of inculturation. As Son and Spirit have their unity in God, the Church has its foundation in the triune God. „The reason why the Trinitarian foundation of the reality of the Church is important for the Old Catholic understanding of the Church is the fact, that it makes possible to understand the human communion in the Church as participation in the life of God being communion.“[1]

Thus this ecclesiological approach starts from soteriological and Trinitarian premises, and it presupposes a sort of relational ontology for the understanding of reality as being God’s creation. A human being is fundamentally a being in communion, not an isolated one for which to be in communion is a secondary state. This may be expressed by saying that a human being is a person, not an individual, and that the Church is thoroughly constituted by relations of personal beings „facing“ others.[2] The participation by grace in a reality that is basically outside the believers and yet becomes their inner reality may in various ways be reflected in the ecclesiological metaphors like People of God, Body of Christ, Temple of the Spirit, etc. In this context mention must be made of the popular term koinonia or communio: it denotes a communion that is constituted through a common participation in an entity that the members of the communion are not themselves.[3] The clearest expression of this fundamental aspect of the Church is the Eucharist, the ecclesiological relevance of which is not sufficiently recognized if it is simply seen as a sacrament among others.

The Church as vanguard and model of the renewed and redeemed humanity lives in a specific situation between the times: in anamnesis of what is their foundation in Christ and in the expectation of the perfection of God’s love transforming the whole creation.

In this tension the Church has to recognize and fulfill its mission. The fundamental aspects of its life may be termed martyria, doxologia, and diakonia. Martyria includes the various acts of the proclamation of the Gospel, catechesis, the accounting for the hope and faith in all its dimensions, statements on social and political issues as far as they are ineluctible consequences of the Gospel. Doxologia includes worship of God, which manifests in a fundamental epicletic attitude that the Church dares to live on what is promised and given in word and sacrament. In diakonia the Church fulfills its mission of healing men and women in material and spiritual distress resolutely transcending its own institutional borders.

The Church thus being a divino-human communion is an entity whose institutional, structural aspects, however, can be fully described in sociological and other terms. It is this communion in radical ambiguity. This is so because the Church is a pilgrim community, and because of the sins of its members which obliterate and compromise its being a creation of God’s love[4], in the last analysis because of the incarnational „touch“ of God’s acting in the world. Old Catholic theology takes for granted that human beings, even material elements, may be bearers of God’s presence wherever the Holy Spirit –whether invoked in prayer or by its own initiative - makes use of them. Ambiguity affects the perception of the Church in all its utterances. A neutral perception of the God-givenness of the Church apart from faith seems impossible.[5]