Mgr Joris Vercammen concluded the impressive celebration on 11 January - with which he resigned as Archbishop of Utrecht - with the handing over of the crosier to the Dean of the Metropolitan Chapter. About five hundred visitors had come to Utrecht's Gertrudis Cathedral to bid farewell. "As a bishop I was allowed to be a sign of life from the fullness of faith", said Vercammen with a view to his heraldic motto. When the sexton closed the church door after a hard day's work - together with a large team of volunteers - the crosier remained on the main altar in expectation of a new bishop. 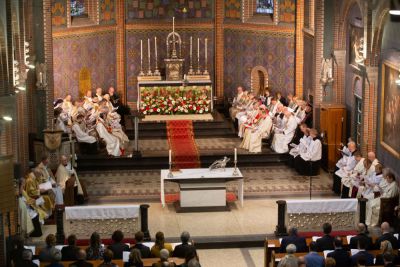 On the day when the Archdiocese of Utrecht had an empty bishop's see for the first time in twenty years, there were no gloomy faces to be seen. On the contrary. The farewell of Joris Vercammen was a celebration of gratitude, esteem, faith and encounter, which the Archbishop-emeritus-in-spe, as the radiant centre, fully enjoyed. The three hundred or so visitors to the symposium in the morning were surprised by the premiere of a striking cinematic portrait of Vercammen, made by Dio van Maaren. The video showed images from an earlier documentary about a pilgrimage from Vercammen to Lapland - in the footsteps of Dag Hammarskjöld - combined with current conversations in the Flemish church where he grew up as a child. In a personal and honest testimony, Joris Vercammen reflected central themes of his thinking about faith, church and vocation. Difficult moments for him were also discussed, such as the faltering ecumenical progress, resistance within the church or the problem of sexual abuse. The symposium was a gift to the outgoing Archbishop of the Metropolitan Chapter of Utrecht.

While the visitors of the symposium went into the cathedral, the first visitors of the Eucharist were standing at the church doors one hour before the beginning. Because of the fast filling cathedral, the Gertrudis Chapel in the congress centre 'De Driehoek' was arranged as a parallel church room. This worked well, because the ceremony was also celebrated attentively in the chapel, also because of the presence of two priests who acted as a link between the cathedral and the chapel. The presbytery was a colourful gathering of national and international bishops, the Utrecht clergy and representatives of various churches, who dressed in liturgical vestments. The 18th century crosier was waiting in the Chapter House as a silent witness to the event that the archdiocese was to experience.

The cathedral was filled to the last seat during the celebration, both in the pews and around the altar. Besides church leaders from all over the world, civil authorities were also present, such as the Mayor of Utrecht, Jan van Zanen, and the King's Commissioner for the Province of Utrecht, Hans Oosters. 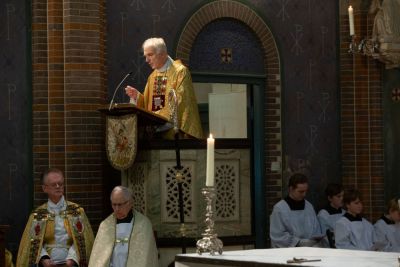 "A bishop is the one who invites to be related. In doing so, he has no choice but to relativize himself. I. e. : to think unconventionally, away from one's own small certainties, away from what is supposed to have been 'always', away from what society expects, away from all that... to be free to engage in the adventure of living with God," said Bishop Joris Vercammen in his homily. He pleaded for a church "where one is simply welcome". "You don't have to pay for it by giving up certain parts of your personality, you don't have to profess dogmatic highlights, you don't have to adapt to a culture. You may be yourself, as the Creator wanted you to be."

After Communion and the episcopal blessing, the special liturgical moment followed, which made the resignation of the Archbishop visible. Vercammen handed over the crosier - symbol of his administrative power and the shepherd's concern for the faithful in the diocese - into the hands of Wietse van der Velde, Dean of the Metropolitan Chapter. The end of the 20-year episcopate of Vercammen was accompanied by a warm cheerfulness. "It was beautiful!"

Short speeches followed at the end of the celebration. On behalf of the International Bishops' Conference of the Union of Utrecht, Bishop Harald Rein of the Old Catholic Church of Switzerland expressed his appreciation for the international work of Vercammen. Between the lines, he addressed the electoral college of the Archdiocese of Utrecht - which will elect the successor to Vercammen - that in defining the professional profile of the new Archbishop, his duties as President of the Union of Utrecht should also be taken into account. These are tasks that Vercammen has fulfilled with great effort and success. 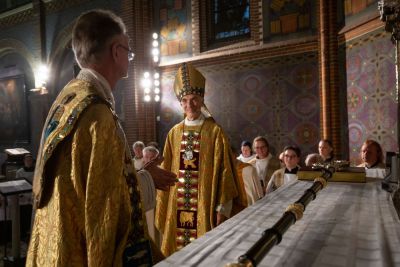 Bishop Dirk Jan Schoon, Bishop of Haarlem and Chairman of the Collegiaal Bestuur of the Old Catholic Church of the Netherlands, praised Vercammen because he always stood for an open church. "Where you were dealing with a closed culture or with inward-looking congregations or individual church members, you tried to break through this by inspiring people to think and act differently". Schoon made no secret of the fact that there were sometimes tensions in the relationship with his Utrecht colleague. "Even within the board itself, but also between the two of us, this sometimes led to friction and even to injuries and pain. And this perhaps not even because we disagreed with each other in principle, but because we were not on the same wavelength when it came to how something had to be tackled or treated". Nevertheless, Schoon stressed that Vercammen can look back on a time when the necessary successes were achieved. A fraternal embrace between the two bishops was rewarded with loud applause. "Your announcement on 26 September last year that you wish to resign from the office of Archbishop of Utrecht came completely unexpected for most people," recalled Dean Wietse van der Velde. He also mentioned Vercammens' too "great vigor, unbridled energy and sometimes impatience".. "All this sometimes meant that not everyone could keep up with you. But everyone who saw you busy knew you did all this as a zealot for the cause of the kingdom of God."

Until the election of the new archbishop, the chapter will have daily administrative responsibility for the diocese. The election will take place on 15 February 2020 at 11.00 a.m. in the Cathedral of St Gertrude in Utrecht and will begin with a Eucharist.