The Changing face of Ecumenism

This year, the Conference of General Secretaries and Secretaries of the largest and/or the most important Christian denominations (families of churches) took place from 8 to 10 October 2019 in Christiansfeld / Denmark. The town is home to the worldwide headquarters of the Moravian Church (also known as the Unitas Fratum), which hosted this year’s event. The official name of this conference is the Conference of Secretaries of Christian World Communions (CS/CWC). The Old Catholic Churches of the Utrecht Union are represented by Bishop Dr Harald Rein from Switzerland. He has been attending this conference since 2009 as Secretary of the International Old Catholic Bishops' Conference. His short report is given here. 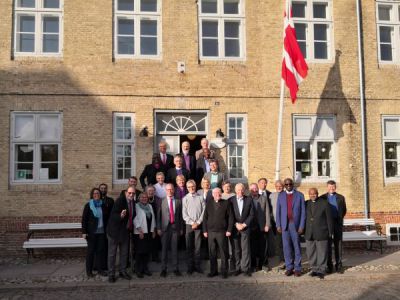 This year, there were four main themes:

1)     As always, the program began by looking at the developments, concerns and joys within each denominational family represented and, most particularly, at the status and results of any bilateral dialogue. These reports serve to promote mutual understanding, and to provide information and the exchange of ideas, as the General Secretaries meet together.

2)     The annual conference also serves from time to time as a forum for encounters with old and new movements and organizations that work interdenominationally within the ecumenical movement, such as the Christian Global Forum, the World Evangelical Alliance (WEA) and the World Council of Churches in Geneva. The Conference met the new General Secretary of the Christian Global Forum, the Revd Dr Casely Essamuah from Ghana; their exchanges with the WEA focused on missionary work among Muslims and the persecution of Christians in Muslim countries; and they took their leave of the outgoing Secretary-General of the World Council of Churches, Olav Fiekse Tveit.

3)     In an effort to optimise the content and timing of future conferences, discussions were held on how 1) and 2) could be better coordinated.

4)     Getting to know the host church was an impressive part of the Conference, and covered dogma, history and divine worship. The latter also involved the Agape or Love Feast. This is not understood as a sacrament, but as a diaconal and fraternal sign of love and love of neighbour.

The next Conference will be held in Nairobi in November 2020. The event will be hosted by the OAIC, the Organization of African Instituted Churches, whose representative on the CS/CWC is the Revd Nicta Lubaale. Finally, for the very first time, the Conference elected a woman to the chair; Gretchen Castle from the Quakers will preside for the next two years.