Dr. Heinz Lederleitner, the parish priest of Krems–St. Pölten, Austria, was elected bishop of the Old Catholic Church of Austria at the Synod meeting in Klagenfurt on 24 October 2015. In line with church regulations, the result was communicated to the International Bishop’s Conference of the Union of Utrecht, which approved the ordination. As three bishops are required to consecrate a new bishop, Lederleitner invited his predecessor Bishop Dr. John Okoro and Bishop Dušan Hejbal from the Old Catholic Church of the Czech Republic to act as co-consecrators alongside Dr. Joris Vercammen, Archbishop of Utrecht, at the episcopal ordination in Vienna on 13 February 2016. Among the guests were church representatives and state dignitaries from Austria and other countries.

A meet-and-greet event on the evening before the ordination was followed by vespers at St. Salvator, the Old Catholic church in central Vienna, attended by the bishops of the Union of Utrecht, numerous ecumenical guests, and Old Catholics from all over Austria. Lederleitner then invited the Old Catholic and Anglican bishops to a simple dinner.

The ordination service took place in the Lutheran City Church (Stadtkirche) in Vienna. Despite the gloomy weather forecast, it was a beautiful, sunny winter’s day. A large number of ecumenical guests attended the service, including three suffragan bishops from the Roman Catholic Church, the Lutheran bishop Dr. Michael Bünker, and Orthodox representatives. Every seat in the church was full. The congregation also included many Old Catholics from Austria and Lederleitner’s personal guests and friends.

Following the Liturgy of the Word, which took the theme “Jesus Christ, Light of the World”, and a supportive sermon by Bishop emeritus Dr. John Okoro, Father Erich Ickelsheimer from Kärnten and East Tyrol introduced Lederleitner to the congregation. Eva Lochmann, Chair of the Synod Standing Committee, read out a statement on the election of the bishop by the Synod delegates. The members of the congregation then made the traditional declaration confirming their will for the new bishop to be ordained. Following the Veni Creator and the Litany, the consecration itself took place by the laying-on of hands by the three co-consecrators and the ordination prayer spoken by Archbishop Joris Vercammen. Lederleitner was then presented with the symbols of his new office – his ring, crozier and mitre – and received with applause. He was welcomed into his office by sharing the Peace with the other bishops present, and then the Peace was shared among the whole congregation. 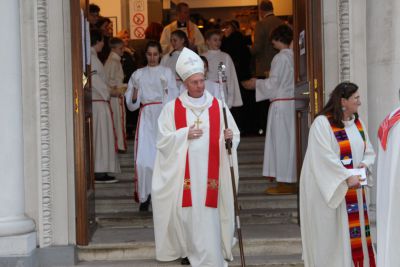 Lederleitner presided during the Eucharistic Prayer and invited the congregation to receive Holy Communion. At the end of the service, he thanked those present and gave the blessing. After the procession out of the church, a band from Franzensdorf performed a selection of Austrian marches outside. A large number of guests then attended a reception at the Palais Pálffy close to the church. Several speeches were made, and Lederleitner received gifts. Representatives of other Churches spoke about their connectedness with the Old Catholic Church and their expectations of the new bishop. To end the day, the bishops of the Union of Utrecht and guests invited by Lederleitner attended a dinner.

The next morning, the Landhauskapelle in St. Pölten held an ecumenical service at which the new bishop spoke on peace being the fruit of justice. Archbishop Joris Vercammen attended the service and subsequent informal get-together to round off the special occasion of Lederleitner’s consecration.