A Distinguished Guest for the Old Catholic Church in Switzerland 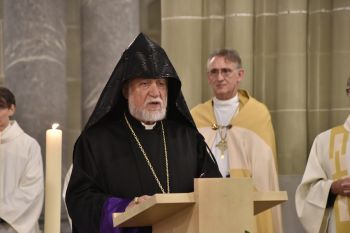 This weekend sees His Holiness Aram I in Bern. He is paying a friendship visit to the smallest state-recognised church in Switzerland.

According to the communiqué, Aram I is regarded as "one of the outstanding contemporary church leaders." He is an advocate for peace in the Middle East and is committed to the Christians who are based there. The visit of this church leader is particularly remarkable, in that the pope (so to speak) of a church other than the Roman Catholic Church will be seen in the middle of the reformed city of Bern.

The Role of the Family under Discussion

The first contact was initiated by the Catholicos. Aram I had suggested convening a working group of Armenian-Apostolic and Old Catholic theologians to explore contemporary ethical questions. As the report states, this group has now been set up and is currently looking at the role of the family in society, including same-sex issues.

On Friday morning, the Doctor of Theology and former Moderator of the World Council of Churches gave a public lecture at the University of Bern. The theme was the challenges faced by churches in the Middle East. Then over an informal lunch, he met with representatives of the University and with Ambassador Wolfgang A. Brülhart from the Federal Department of External Affairs.

On the Friday evening of the visit, a reception will be held in the Lebanese Embassy. On Saturday, the Catholicos will join a group of young theologians for exchanges on various theological topics, and on the situation in his homeland.

On Saturday evening, there will be a service of Vespers at 5pm in the Old Catholic Church of St Peter and Paul. Following this, Aram I will give a lecture on ecumenism. The service of Vespers is open to the public, as is the Eucharist on Sunday at 10am. According to the report, the worship celebration will offer elements of Armenian-Apostolic spirituality, enriched by the singing of the Armenian opera soprano, Hasmik Papyan.

Harald Rein, Bishop of the Swiss Old Catholics, and H.H. Aram I hope that this visit will help to consolidate the links between the two churches. According to the report, they want to "develop the basis for cooperation across cultural borders".

Armenians at the focus of interest

The Old Catholic Church has long maintained relations with the Eastern Orthodox and Oriental Orthodox churches. The Armenian Apostolic Church belongs to the latter group. It is also considered to be the oldest state church in the world. The visit of their representative to Bern is also of particular note because Armenians as a people are at the focus of political interest – not only as having been subject to a highly controversial genocide, but also as one of the ethnic groups treated by the Turkish government with distrust and restrictions.

Questions of ecumenism between the Old Catholic and the Orthodox Churches have long been under discussion. There are two main obstacles. The first lies in the ordination of women, which is possible in the Old Catholic Church. In 1999, their Synod opened the threefold ordained ministry - deacon, priest and bishop - to women through a constitutional amendment; the second arises from same-sex issues. Both topics are hotly discussed.

Here, the Armenian Church is in a very special position: with a large part of its approximately twelve million members living in exile, mainly in Europe, North America and Australia, issues of modern life press with far greater urgency for this church than for other Orthodox churches.