The Permanent Orthodox – Old Catholic International Working Group (OAAG) met in Bern on 5th and 6th March 2019 for its annual meeting. Since 2017, the composition of the group has remained: Bishop Kyrillos Katerelos, Bishop H. Rein, Prof. K. Delikostantis, Prof. G. Larentzakis, Lecturer M. Ploeger and Revd O. Kaiser. The response to various questions has shown that this working group should continue as a "lifelong dialogue" and so cannot be compared with other temporary bilateral dialogues at world level. 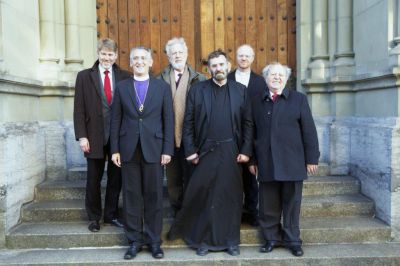 With our eucharistic local church ecclesiology and successful dialogue, our churches are very close ecumenically. At present, the only obstacle to the completion of Church Communion is the question of the ordination of women. In future it is possible that further questions may arise in dealing with same-sex issues in the church.

The Orthodox members described the current developments in their church, with particular reference to the conflict in the Ukraine and the role of the Ecumenical Patriarchate with its position of "primacy" within Orthodoxy; both in general and also specifically with regard to the conflict with the Moscow Patriarchate. It was because of the Ukrainian dispute that the Moscow Patriarchate suspended Communion of office and sacrament with the Ecumenical Patriarchate. At present, the Utrecht Union is dealing with same-sex issues. The introduction of state "marriage for all" in various countries has raised the question of possibly introducing something similar in the church, various options are being considered: A basic ‘no, this is not possible’, OR, if it is possible, then would it be a partnership blessing or a marriage? The opinion-forming process is still ongoing. No decisions have as yet been taken. The churches of the Utrecht Union are aware that the Pan-Orthodox Council of Crete in 2016 were against any such moves on this issue and rejected homosexuality as such.

Future work will therefore focus on the following topic: The current significance of the texts adopted by the Orthodox Council of Crete in 2016 for any joint Orthodox - Old Catholic testimony in the world.